"A fervent and frightened prayer..." 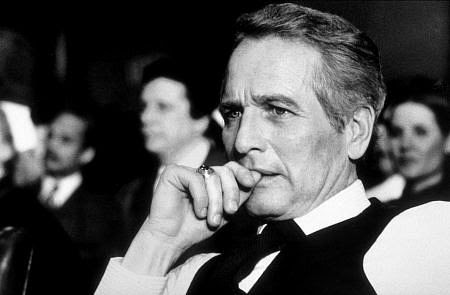 Over the last week, I've been reading tributes in newspapers and on websites to the enduring career of Paul Newman. I heard reports of his sickness in recent months, almost refusing to accept that the frail man pictured in photos was actually him. When I learned of his death late last Saturday morning, I was as surprised as I was saddened -- not just because cinema has lost one of its greatest actors, but because it lost a true artist and model citizen. He gave the movies a positive face at a time in which American movies were undergoing such great change. He was an honest, sensitive actor whose charisma endured over many decades and defied easy categorization, even though that smile was so recognizable. One might even say that Paul Newman was born to star in the movies, with his classic good looks, commanding voice, and unending charm.

Thinking back on his most memorable roles now immortalized in the pantheon of cinematic images, I came to see that Newman as more than a good actor boasting several significant performances. He had a way of uniquely embodying each character he played while still making it his own. There was an undeniable "Paul Newman" spirit to his characters, despite never playing two characters the same. He didn't "disappear" into roles, but instead made them apart of him. It's not often when being yourself is noted as an actor's strengths, but Newman was one of the few who was both himself and whoever he was portraying; the likely result of the shear honesty he brought to his craft.

That honesty was also revealed through his many humanitarian efforts and political activism. I am not nearly knowledgeable enough to fully honor that work, suffice to say that there were many instances from his life on screen that revealed the many sides of Paul Newman.

Perhaps my favorite performance of his is from Sidney Lumet's brilliant 1982 film, The Verdict. Newman plays a depressed alcoholic whose best prosecuting days are behind him. In the film, he finds himself at a moral crossroad, where doing the right thing stretches far beyond the one single case he is serving on. Here is Newman's final case to the jury:

This speech crystallized the vision I have held of Paul Newman for as long as I can remember; i.e., what he means to the movies, his enduring acting career, his humanitarian efforts. Everything I admire about the man and his work can be seen in this singular moment.

Monologues in movies are so often remembered for their intense dramatic rhythms and strong delivery, yet what makes this one of the very finest is the perfect tone Newman finds between defeat and hope. His summation is more than three minutes, but consisting of only a few hundred words. It is somber, soulful, and especially relevant as Americans head to the polls for one of the most important Presidential elections they'll take part in. (One could say that this election itself is a frightened and fervent prayer.) It's also a great tribute to Paul Newman's career in movies and commitment to justice.
Posted by Ted Pigeon 1 comments