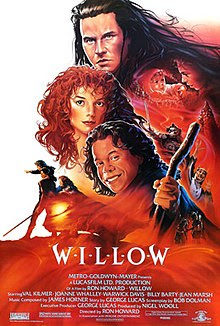 One of the many residual effects of the massive success of the Star Wars trilogy was the boom of fantasy films that arrived in theaters in the mid-1980s. Movies such as Legend, Masters of the Universe, The NeverEnding Story, The Princess Bride, and others were all released within the span of a couple of years, and each to some degree featured sprawling sets, evocative atmospheres, and extensive use of prosthetics and puppets. These elements were staples of George Lucas's storytelling, a quality that proved to be a strong companion to the Star Wars films' grand visual and narrative design. It wasn't long after the trilogy had wrapped that even Lucas himself had dipped into the bankable commercial lore of fantasy moviemaking when he produced Jim Henson's 1986 film Labyrinth. His own contribution to the subgenre followed two years later at a time when fantasy appeared on the decline. With an original story by Lucas, Willow was met with widespread ambivalence upon its release. Retrospectively, however, the film's graceless hybrid of Star Wars-style mythmaking and leftovers from the short-lived fantasy period in commercial cinema that Lucas inspired offers a pointed reflection and portrait of the filmmaker that has grown more compelling as the full trajectory of Lucas’s career has emerged in view.