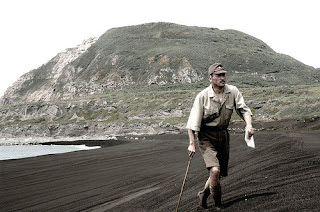 I should first note that I have not yet seen Flags of Our Fathers (though I will be doing so in February, when it is released on DVD). Most of the critical perspectives I have encountered concerning this film have approached it in relation to Flags, which is why it's pertinent to mention. More to the point, this film is a powerfully cerebral and emotional examination of organized violence that frames national ideology through the prism of the feelings of soldiers on the front line approaching their doom. It depicts the battle of Iwo Jima from the perspective of the outnumbered and nearly hopeless Japanese soldiers charged with the task of defending the island. One of the film's great strengths is that it communicates so much thought and emotion through very traditional storytelling and cinematic styles, i.e. flashbacks, voiceover letter writing, but what separates the presence of such devices in this film is that they contain subtleties that are largely unexplored in many other films, in particular war cinema. The film chronicles the feelings of various characters from all levels of the military - from the commanding General (excellently portrayed by Ken Watanabe) to a lowly infantry member - through the letters they write and the memories they recall while writing them.

The film is an intimate study of several characters attempting to uphold the ideals of country and honor but are most loyal to their wives and children. Eastwood also examines war from a greater humanist perspective, offering a subtle exploration of personal and national perspective while at the same time capturing the notion of how the institution of military and its ideals allows one to filter his or her perception of violence and the perception of the "other," or the enemy, and an understanding of country and honor. The vivid images of soldiers taking their own lives will live with me forever, and while they are capable of conjuring so much emotion, Eastwood's subtle exploration of perception and identity and how they relate to organized warfare is powerful and cerebral.

But Eastwood never slams you over the head with messages. The beauty of the film is its simplicity. Its themes may seem broad since they are the focus of many war narratives, but Eastwood's honest and contemplative narrative exposes many of those stories for how superficially they attempt to understand such issues. He is more interested in observing the inner feelings and behavior of those engaged in war than simply manipulating characters as narratives devices for pushing an anti-war messaged story. His film is far deeper and more knowing than that. His narrative devices only work because of sublimity with which he imbues the images of death and how soldiers react to it. It goes without saying that the performances strike a resonant chord within the world that the shadowy images have created.

Throughout his career, Clint Eastwood has attempted to grapple with mortality through many different storytelling styles and images. With each story he tells, he provides a uniquely different perspective on not just the ability to take another person's life, but the feeling of powerlessness your own is stripped from you, which is the focus of this film. All of the memories, thoughts, insights, and feelings of each man that dies in the name of some greater ideal is terminated as he becomes just another body amongst bodies. Every time a man is killed and his life drains away, Eastwood forces you to take notice where other films have not. He is not merely throwing you into the lion's den and making you feel the viscera of battle; he wants to understand the feeling underneath it, whether that be fear or exhiliration. He doesn't push any ideas on the spectator. His brilliantly focused story is instead interested in inquring into how a human being grapples with facing his or her own mortality as well as the worth of national ideals and ideas such as honor.
Posted by Ted Pigeon

I watched this movie too.
I'm strongly impressed with it.
I've been interested in Iwo-Jima fight.
Geberal Kuribayashi(in your picture)is a unique commander in Japan in those days.
So now he is set high valuation.
Truly he sent mails to his family.
and heart-warming letters are witten.
He is the very Samurai.

Thanks for your comment, nu! I very much like your samurai comparison while watching Ken Watanabe's portrayal of the General. He is really the anchor of the film as it depicts him processing the growing dread as he comes to grips with the fact that the very country for which he represents so proudly has abandoned him is very provocative. And how he relates to his own men is also intriguing because he never loses touch with the experience of war from the perspective of those who actually fight it. While his mind is so strategic in planning the defense of the island, his care for the soldiers juxtaposed with the knowledge that he can't win is how his performance takes life.