The original Rocky (1976) was gem of a movie. It captured a city and a man so well, conjuring a light of hope in its subtle images. Sylvester Stallone's screenplay was an execution of formulaic storytelling, but it resonated due to the sincerity of the character and the viewer's easy identification with him as he metaphorically journeys through an identifiable world of cynicism refusing to let it defeat him. Stallone's archetypical hero struck a chord within the collective unconscious. The Philadelphia Museum of Art has since become a site where anyone who has ever been, young or old, has triumphantly ascended the steps for thirty years.

Through the Reagan 80's, Rocky somehow lost his roots - his humbleness and earnestness - and came to embody an indestructible image of America that was never true to the character with whom viewers originally connected. Every film after the second (which itself was a rather hollow clone of the first film) had Rocky battling a new implaccable enemy to overcome all obstacles. The films became increasingly hollow; shallow parodies of their own cliches. They boasted more montages, more extreme editing and close-ups, and more pounding jingoistic scores during the bouts... and more distance from the quiet, subtle magic of the original film. Like so many other endearing archetypes in American cinema, Rocky was reduced to a Hollywood commodity for demographic consumption, much like what's currently happening to a certain captain of a certain Disney pirate ship. The Rocky films would drift into embarassment and eventual oblivion after the fifth entry in 1990. (Note: The Rocky franchise to that point still did not hold the title for biggest drop in cinematic quality from original film to last in a series. That title went to the Jaws sequels.) 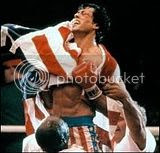 However, last year saw the release of a brand new Rocky picture, a fully thirty years after the original film, entitled Rocky Balboa. Representing Stallone's attempt to give the franchise and the character a worthy send off, the film depicts its hero once again beat down now that the world has passed him by. Interestingly, the fact that there were so many bad sequels between this film and the original film makes the experiencing of viewing this film all the more fascinating since it mirrors the original in so many ways. Stallone is able to make the character sympathetic again - Rocky is once again lovingly dumb. And despite that he wants to recreate the atmosphere of the original film, Stallone manages to squeeze in as many inspirational messages, speeches, and stylistic devices as he possibly can, making this film an odd hybrid of the original's framework and message suffused with the latter films' pretentiousness.

Though the film is set primarily in the run-down streets of South Philly, Stallone never achieves the visual sublimity of the original film. That is because he is so steeped in the current aesthetics of mainstream films that any attempt to give the film visual flair feels all the more awkward due to the simplistic "talking heads" method of editing, among other things. While Stallone clearly wanted to imbue his film with a unique visual style full of light, shadow, and color, the attempt doesn't work because the editing makes every encounter artificial, bringing out the hokiness of the dialogue and the performances rather than enhancing them; the same goes for the dramatic lighting. I may not have noticed this as much in another film, but when Stallone depicts the same character and same general story in the same place with the same themes, it's hard not to notice how much the contemporary styles stick out among Stallone's attempt to recreate the feel of the original film. And no matter how many sad close-ups there are of Rocky remembering Adrian, the film's awkwardness due to its pedantic visual style and execution of its narrative conventions smothers any real moments that could have emerged.

Structurally, the film is textbook screenwriting (much like the original film), echoing the original film's framework of building up to the big fight. While this wasn't a problem for the former film, these conventions are exploited for their simplicity in how Stallone shoots and puts together the end product. I got the impression that even though the film is about aging and becoming different, Stallone wanted to create a feeling of sameness, one that just isn't possible, especially given the character's now cultural presence. I recalled reading Ty Burr's excellent review of the film, in which he refers to the film as Stallone's own crisis of age, rather than an apparent mature treatise on acceptance of age and mortality. The passage of time and the film's struggle for naturalism - even in making its absence for 16 years part of the storytelling - results in a disjointed viewing experience. The viewer's relationship with Rocky is now picked up some twenty years later in a world that occupies the same temporal existence as our own. For all that time, we've been without Rocky. Now that he's back for one final bout against all odds in a film with the best of intentions, embracing this character and likewise the film just isn't the same.

Therefore, while the film consciously represents the metaphorical journey of redemption and coming to terms with moving on from past glory, it also inadvertantly represents that struggle of the "then vs. the now" in its confused visual execution and narrative tendencies. Despite this strange tension that dominates and defines the film, there are a chosen few moments in which Stallone seems to effectively grasp this struggle and thus rekindles the magic rather than trying recreate it. In these moments, I felt a little bit like the character I suppose, relishing the rush of emotion to the visuals of Stallone running through snow and the tune of Bill Conti's famous theme music. I speak of course of the inevitable training montage, which somehow captures the past and the present in ways that the rest of the film cannot. Its rushed cuts and seeming impatience to unleash the training as seen in the faster editing is evidence of the overall strange self-consciousness with which Stallone made this film. Even when the film is becoming looser with itself and the tension alleviates, it still demonstrates an adherence to contemporary editing and shot composition techniques that isn't conducive to the film's more traditional montage. But despite my reluctance and resistance to these better constructed, yet still awkwardly self-aware moments, the laughably delightful sight of Rocky running the steps once more proved that on some level the story still connects, even if one is seemingly too removed to consciously appreciate it. There is an undeniable and inexplicable sense of ridiculousness to this surge of energy; a surge that Stallone still manages to capture in all of its pompousness and enjoyment.

But in the end, his film is confused, sloppy, and hopelessly positive. The experience of watching it is both welcoming and discomforting, resulting in a film capable of a few fresh bursts of old energy surrounded by a hollow shell of a movie bent on recreating a magic that's long gone, thus prompting reflections of how such energy ever existed in the first place and how genuine it ever was.

Rocky Balboa never quite operates outside the world of the past to occupy its own time here and now. Then again, I suppose that's a problem most sequels face. In light of the more recent sequels, this film can be commended for its shear desire to recreate the feelings of the original film. But, as compared to the original alone, we quickly realize that the current film is damaged more by its insistence of recreating that magic from thirty years ago.
Posted by Ted Pigeon