All criticisms aside (and I have many), Spiderman had a colorful sense of exuberance in its images and characters. Sam Raimi's film was deliberately hokey, revelled in its own naivete, and felt oddly fresh in its familiarity. What it lacked in excitement, it made up for in playful charm. When Spiderman saves Mary Jane and swings with her between the skyscrapers of New York, the images breathe with life as Danny Elfman's choral music swells. That Spiderman looked cartoonish slinging himself through the streets of Manhattan didn't take away from the beauty of the moment. Though far from a truly memorable superhero film, it's no wonder that the film drew such strong box office, especially in the first summer after September 11th. 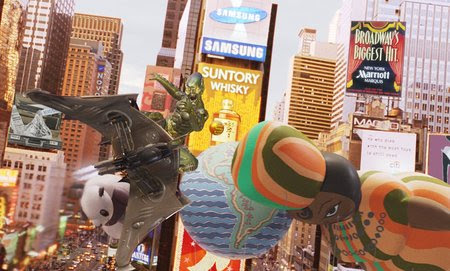 With Spiderman 2, the visual freshness was maintained and built-upon, with a far more real (though still noticeably animated) Spiderman swinging through town. While the story remains pop drama, there was something endearing to Peter Parker's undying desire to confess his love to Mary Jane, while saddled with the responsibility of keeping the people safe. Its villain, Doc Ock (brilliantly played by Alfred Molina), was much more memorable than Willem Dafoe's Green Goblin, and the film manage its action effectively - both in relation to the film's overall structure as well as from shot to shot of each individual sequence. Raimi seemed more comfortable directing large scale action, and the visual effects were employed to unify with the live action elements, rather than create distance between them (as in the original film).

With a touching story for the hero and villain and visual flair to the action scenes, Spiderman 2 capitalized on its seemingly effortless screenplay. Its personal drama was brilliantly complimented by a unique intensity to the villain and action sequences that the first film lacked. Despite its larger scale, Spiderman 2 felt personal, written and made by filmmakers who cared about the genre and characters, and it showed in its compositions and structure.

The rythyms, compositions, and structure of Spiderman 3, however, feel forced and inconsistent, not only in relation to the previous two films but within the film itself. This is of course the built-in problem that many sequels face. Especially on the heels of such a well-structured and thoroughly original sequel (let alone movie), the next film is typically self-consciously trying to replicate magic, e.g. Alien 3, The Godfather Part III, X-Men 3. But in the case of Spiderman, its not for lack of creativity. Raimi and company certainly try to accomplish new things with the story and character, but they often render themselves moot because the film wanders aimlessly exploring the film's possibilities as if they feel pressured to do so. The resulting film is an awkward mix between corporate studio wishes (appealing to every demographic and having "a little bit of everything") and true creative instinct. The film goes for big moments too consciously and it fails in delivering the emotion it seeks to conjure, whether that's exhiliration, envy, or rage.

Many have criticized Spiderman 3 for offering too many villains, too many plotlines, too many "big" moments. But my criticisms reside not in the film's ambitious disjointedness, which can actually be a good thing, but in how generically an instrusively the film's elements interact with one another. Individual sequences lack the drive they strived for, and what seemed fresh in, say, Spiderman (hokey plotlines, etc.) seemed incongruous with this film's ambition of embodying a more serious, darker drama. None of these elements worked well together because the film felt, by and large, manufactured. The film introduces its plotlines and felt obliged to develop them to logical conclusion. Not only does it feel calculated, but Spiderman 3 lacks vigor and feeling. as if it was comfortable enough to rest upon the spectator's familiarity with the wonder of the previous films and therefore feels no incentive to conjure some on its own.

Had the film been more focused in terms of its plot structuring and was less stuffed, I get the feeling it still would have suffered the same problems. That's why I find it difficult to accept criticisms that the film lacks cohesive structure. While perfectly structured piece of classical filmmaking can achieve great things, so too can a disjointedly structured one. Within the images themselves, the elements don't move with life as they did in the previous film. Interestingly, one of the major subplots involved Peter Parker dealing with an inflated ego and learning to find his true innocent self once more. But the film seems to suffer from the same problem, confident in its own creation despite not really offering a cinematic experience it so well acknowledges the previous entries were.

Nevertheless, the film exhibits a tension underneath its manufactured nature, and that is the creativity trying to break through. When I claim that the film feels more like a studio's film than a director's film, I don't mean that Sony all of the sudden stole the reigns from Sam Raimi, but rather that Raimi himself has suffered from studio laziness perhaps due to the massive success of the previous films. The film never feels as though it's not a Sam Raimi film, but that Raimi's images have been filtered through a watered down, lazy-inducing system prizing plot quantity and "big" moments over locating subtlety in dramatic scenes as well as the action-oriented ones. Like Peter Parker with his hair down in his face, sporting all black and swinging his pelvis at women on the sidewalks, Raimi seems too eager to impress out of recognition of his own acknoweldged talent. But, as mentioned, his filmmaker prowess isn't totally eradicated. There are moments of genuine inspiration - notably when Flint Marko (Thomas Hayden Church) becomes the Sandman and tried to form his own body out of a pile of speckled sand, as well as the scene in which Mary Jane breaks up with Peter in Central Park. Raimi's camera locks onto Tobey Maguire's emotive eyes so magnetically and finds true heartbreak in the moment.

To its credit, also, the final action sequence seems in the spirit of the comic books that inspired it, with Sandman and an underused Venom teaming up to battle Spiderman in, on, and around a construction site. The scene has the courage to be true to its somewhat pretentious roots, but Raimi has no problem with it and it is both goofy and enjoyable. The following scenes of closure to the character's individual subplots are as painfully artificial as Raimi has ever been, unfortunately. Spiderman 3 closes on a serious point that effectively sums up its assuming and egotistical nature about itself.

Unlike Spiderman, this film never quells its bloated assurance of its own worth, which is why it feels so comfortable experimenting to employ so many familiar and simple plot devices rather than really exploring this world and its characters. The filmmakers seem comfortable to rest upon their own accomplishments with the last two films. As Spiderman swings about the city's towering structures looking more real than ever in Spiderman 3, the naive sense of wonder created by his previous travels amongst the skies is all but drained away and Spiderman becomes all the more unreal.
Posted by Ted Pigeon