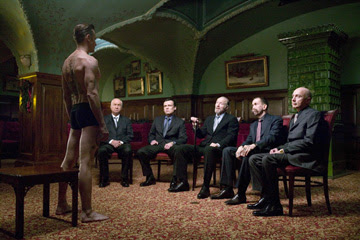 The opening scenes of David Cronenberg's Eastern Promises (2007) depict a man awkwardly severing another's neck. They both quiver in fear; one for losing his life, the other for taking one. Cronenberg draws out this precise feeling to unbearable lengths, with the stable camera refusing to edit to another image as we see the struggle ensue. Where many filmmakers are content to represent brutality via images of slit necks and stabbings often containing just enough detail to keep the viewer at a pleasurable distance, Cronenberg refuses you that pleasure. In doing so, he locates a primal state of feeling blood flow through your vains and his images invites another form of pleasure. The scene consists of a very simple series of shots which (as Jim Emerson expertly notes) evoke the difficulty and the struggle of being on both the perpetrating and receiving ends of the killing of a person. It's almost a sexual encounter in a sense, one that's revealed to be nothing more than business once it's over. Of course, this isn't the last time we see violence of this nature in the film. But in that moment is the whole movie.

Eastern Promises is an equally sumptuous and repulsive exploration of family, bodies, and the social structures that govern the underbelly of society. The narrative focuses on two central characters, one a driver for the Russian mafia (Viggo Mortensen), the other a suburban London midwife (Naomi Watts). Both Nikolai and Anna deal with violence and its effects as part of their jobs, but must remain detached from it. Both also understand the trappings of family. And yet they could not be more different. When Anna uncovers the diary of a young Russian prostitute who died giving birth, she seeks out the Russian company with whom the girl was connected in an attempt to locate the baby's family. This, however, unwittingly involves her in what she soon discovers to be the Russian mafia.

While the exposition seems almost to be setting up a suspenseful thriller about an innocent woman trying to escape the the mafia, Cronenberg instead uses it as a means for exploring the interactions and perceptions of Nikolai and Anna with each other and in their respective environments. He reveals the innermost character of complex individuals who, being typical "villains" in many films, are easy to simplify to bad guys. Instead, Cronenberg observes the simplicity of their lives through the the day-to-day practices of their operation. The head of the family, Semyon (Armin Mueller-Stahl), is a softly spoken gentlemen who wears button down sweaters and moves gingerly about his restaurant, talking of food and wine with family. His son, Kirill (Vincent Cassell), is a lunatic who tries to be tougher than he really wants to be, has no idea how to express anything resembling an emotion in an intelligeble, respectful manner. Nikolai, the driver, maintains a detachment concerning his daily work that represents the face of Semyon's business. He does not emote, show worry or remorse for anything. Nor does he have to. When you look into his eyes, you don't question a thing he says or does. But he remains a mystery to everyone around him. Mortensen has a unique, sublime way of making emotionless behavior so expressive that when Anna is unafraid to approach him, one can relate to her doing so. Nikolai, while seemingly cold and detached, has much going on beneath his surface. Capable of the most brutal of murder and operating seemingly without conscience, however, his motivations and inner secrets cannot be discovered by anyone.

No matter the amount or level of violence, the best mafia/mob movies are never about violence. They instead probe the lives of violent people in honest and subtle detail. There are many long scenes of dialogue among the many characters in Eastern Promises. During them, there is a feeling that we are being let into the mundanities of mafia life, seeing their familial and economic tensions. This of course makes the outbursts of violence all the more intriguing, as we see how violence manifests within the characters' lives as an assertion of power, and a test of will. Even sex for these men is a raw expression of violent impulses, as if that's the only way they now how to interact with another individual meaningfully. In conversation, we see masks and repression. Therefore, it's in how their bodies interact that enable Nikolai, Kirill, and others to attempt to express their inner desires and repressed states.

Physical signifiers of the importance of the body are the tattoos that cover the bodies of the Russian family. Physical markings on one's body tells his story so that it need not be expressed in language, which is used primarly for business interaction. These mens' identities are lliterally cut onto their bodies; which tell stories of their family, country, and achievements. Their naked flesh reveals their innermost passions and memories.

But the glaring difference between his two most recent films is that A History of Violence fetishized mechanical weaponry and its effects on bodies; malforming and mutilated them. However, there is not a single gunshot to be seen or heard in Eastern Promises, and yet many people lose their lives. It does not contain so much as one composition of an automatic weapon of any sort. Here, Cronenberg more explicitly focuses on bodies mutilating bodies and colliding with one another other.

Rather than employing the advantages of mechanical weapons, the characters in this film are instead forced into close contact with each other with the use of knives in combat. Despite that knives starkly contrast with the brute force of a fist, they nonetheness function as extensions of bodies, enabling one body to penetrate fully into the surface of another. It is the convergence of sharply cold surfaces and warm flesh that Cronenberg evokes so sensuously in moments of bodies crashing into each other. He observes the icy precison with which a blade smoothly glides across the skin's warm surface to unleash spools of blood, as well as the sharp plunge of a knife's edge deep into the body. It is both beautiful and harsh, and Cronenberg finds both in individual moments, particularly in a scene late in the film in which Nikolai, naked, must defend himself from two attackers using only his body. In this scene, Cronenberg wants to to see and feel every detail of bodies in action, the vulnerability of it, and the primal behavior of survival. In these moments, in the coming together of bodies, Cronenberg elucidates the complex relationships that emerge from the seemingly simple aspects of lived experience. And his framing it all through the diary of a violated woman, a woman who never had a choice, and the physical marker of that --a baby-- is wrenchingly powerful.
Posted by Ted Pigeon