Variations of this phrase have flowed through critical discussions for some time. Though I lack a solid grasp of what it means for something to be "for its own sake," I think of the phrase as essentially another way of putting the cliche, "All style and no substance," albeit with a less negative connotation. But what does it mean to suggest that a film doesn't have substance (whatever that is), or that it is an exercise in "form over content"? Many critics have pondered this over the years. The question seems to express of the most basic curiosities about cinema, specifically how a film works and what the relationship is between story and image.

Recently I watched Martin Scorsese's After Hours (1985), and I started to think about this question after reading commentaries about the film. I suppose I shouldn't hold it against critics for not knowing how to situate something like After Hours within the director's filmography (especially during the 1980's, when it hadn't yet emerged fully into focus). Nevertheless, the general narrative that emerged about the film was that it represented Scorsese's attempt to blow off some steam without any clear intent or guiding principle. From what I've read, Scorsese made the film to prove to himself and others that great filmmaking was inert to him, like a language through which he required only its most basic tools. There are a number of recurring motifs and visual cues in the film, but they seem to operate without the goal of offering a statement or even an underlying idea. After Hours is not simply the story of a man who has a bad night, or who has that bad night because of a particular bad choice he made. Nor does the movie seem to be the alternative, i.e. a random chain of unfortunate events for this one gentleman who simply wants to go home but encounters resistance with every step he takes toward doing so. That's why the movie seems to exist for its own sake. 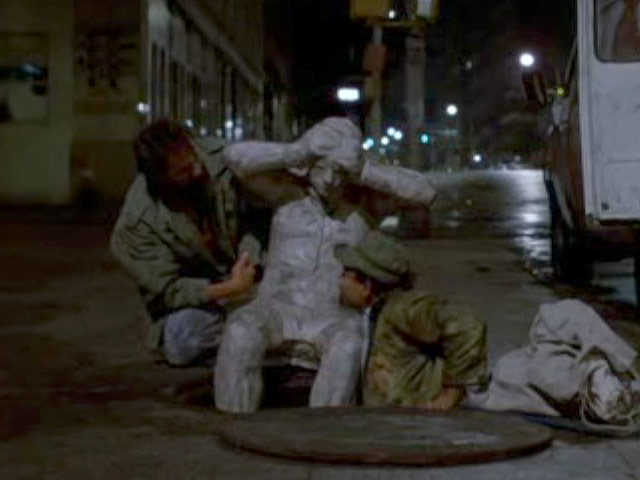 Yet, even though After Hours does not seem to have "substance" in the traditional sense, its "style," or narration, is with clear purpose and meticulous design. This is evident from the opening shot swinging fast through the office of New York high rise, to the frequent juxtapositions of festishized close-ups and long-shots of street alleys or stairwells. There are mysteries to this film that work beautifully in the context of the film's visual palette and equally well as evocative images in their own right. And often the same images are alluded to and re-emphasized in obscure ways over and over again. Paper mache figures, beams of light cutting through empty city streets, long stairwells, keys, huge windows, and a curious Mister Softee truck. It's like Scorsese layered these images with only visual unity in mind, even though the images themselves have no relation to each other.

Scorsese spins this seemingly directionless film into a virtuoso work that begs to be interpreted and given some kind of greater meaning. Each scene presents a new vignette of a person, a place, an interaction, each which is as connected to another vignette as it is disconnected. And although I kept searching for some kind of meaning or idea to which I could attach the feelings I experienced watching the film, After Hours works so well because it eschews broader concepts and themes. Maybe that's the strongest statement to emerge from the film.

It's worth noting that After Hours so often is displaced in the conversation about Martin Scorsese and his films. Within his filmography, it doesn't seem to have a place. Yes, it contains signatures that can be identified as staples in the filmmaker's work, but there is little evidence in this film of the preoccupations that guide so many other of his movies. (Scorsese himself has helped facilitate the narrative of his own legend, frequently noting his connection to mob movies, or, as he calls them, gangster pictures. Thus, it somehow seemed as fitting as it was hollow that his industry validation would arrive with the 2006 Best Director/Picture winner, The Departed.) While Scorsese's historical and cultural interests are bared more clearly through the easily connected narrative similarities across the films he has made, his real talents as a filmmaker have always been capturing subtle eccentricities in performances and creating images of urgent beauty. Nowhere in his long career is this more on open display than in After Hours. More than most other movies that proudly lay claim to providing an "exercise in style," or an experimental assembling of disparate images and sounds, After Hours leaves you to wonder just what it is about cinema that is so affecting and how you are so enamored by it.