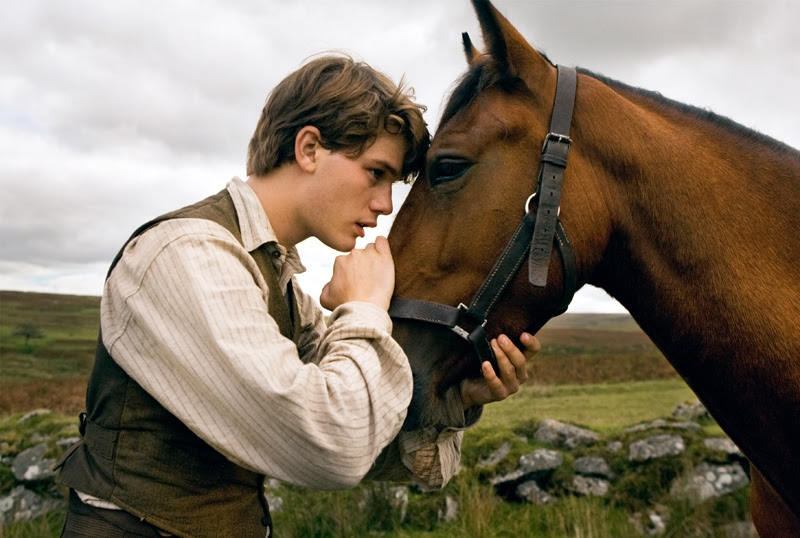 Oscar prognosticators lately have been crowing about Steven Spielberg's other December release: War Horse. A quick internet search should reveal why. It is a World War I narrative set on the English countryside that chronicles the story of "a boy and his horse." The premise is dubious and potentially fraught with ideological quandary, but Spielberg's name on a wartime drama all but guarantees it a spot on the list of Best Picture nominees. Feedback has recently begun to emerge on the movie, and, while I won't speculate very much regarding its Oscar chances, I did have the opportunity to see the film recently and can offer some reflections.

The film centers on a horse named Joey, who is auctioned off to a poor farmer who can hardly afford to maintain the farm and support his family. The farmer's son, Albert (Jeremy Irvine), trains Joey to plow the fields and eventually takes the horse under his wing. Structurally, War Horse resembles Spielberg's film of ten years ago, A.I.. The first act presents a focused family drama before drastically changing course for an episodic second act, which follows the horse on a series of encounters with a variety of folks on different sides of the war. Like A.I., this film is most effective in delivering the shorter vignettes in its long middle section rather than with the main story established in the opening 30 to 40 minutes. However, while A.I. gave us a machine who simulated the actions and emotions of a human, Spielberg here asks us to invest in an animal that cannot feel or simulate human emotion. But to my surprise, the "horse perspective" plot device works very well because the story remains fixed on the human characters that weave throughout the horse's narrative. Each of the smaller portraits in the middle of the film are delicate and compelling in depicting how various individuals are affected by and participate in the war. The human characters are mostly all good people who do little things to help each other out. While not especially subtle, these smaller stories are quilted together into a larger anti-war mosaic that I found much more convincing than the director's 1998 anti-(but-also-pro-)war film Saving Private Ryan. This film gives us characters on all sides of the conflict that are fearful, caring, and human.

In Spielberg's vision, the larger context for the war and the strategic interests of the sides are not factors. This is where the plot element of the horse perspective plays a key role. Without projecting too much human feeling onto the horse, Spielberg uses Joey's story to fashion benign observances of the fear and benevolence. The film adopts a serious view of the implications for war while also citing the need to distort its reality (particularly in a wonderful passage involving on older Frenchmen and his granddaughter). One common thread to the human stories is the often dehumanizing social roles we inevitably must inhabit to survive. And as is typical of a Spielberg film, technology also features prominently among the film's thematic undercurrents, particularly the technology of warfare. Another integral element that begs further exploration is how people communicate, whether with animals, the enemy, or through technology.

Considering all that it has going for it, it's a wonder that the film's main plot is its most problematic element. That is not to say the story of Albert and Joey is vapid; it just doesn't connect on the gut-emotional level that Spielberg is known for registering. He handles the early scenes of familial drama with uncharacteristic sluggishness and sentimentalizes Albert and Joey's relationship and Albert's relationship with his father to an extent that will some will find too much to stomach. And the John Ford-inspired ending —in which Spielberg uses every item at his disposal from the sentimentality toolbox— reminds of the ultimate simplicity of the narrative, which after all is about a boy and his horse. Nonetheless, despite baring the director's weaknesses, War Horse also showcases Spielberg's considerable strengths, which include the ability to infuse a tired, maudlin plot with a high level of visual sophistication and narrative dimension. (Steven Spielberg, 2011) ***

[On the film's Oscar chances I will say this: If War Horse has a shot, it's going to be on audience response. I expect critics are going to be hard on this film. It might have the broad support of the general reviewing community but the more discerning circles will be unsparing, much like response to last year's winner, The King's Speech.]
Posted by Ted Pigeon