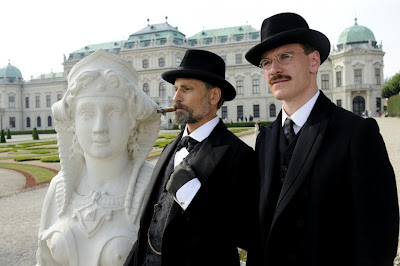 Since shifting away from creatures and techno-fetishes in recent years, David Cronenberg’s macabre sensibilities have manifested in new ways. He expounded on the intersection of violence and identity in both A History of Violence and Eastern Promises, whilst stretching each of their narratives to reflexively visceral extremes. His latest film, A Dangerous Method, continues this trend and ventures onto new ground for the noted auteur. It deals with the beginnings of psychoanalysis. Specifically, A Dangerous Method tells the story of the relationship of two of the most influential practitioners of psychoanalysis: Sigmund Freud and Carl Jung. If the thought of a turn-of-the-century drama about the birth of one of the most influential movements in human thought doesn’t excite you, don’t let the plot fool you. For beneath its fiercely theoretical overtones, A Dangerous Method arouses the senses and provokes thought in typically strong Cronenbergian fashion. In fact, the glossy period trappings and meticulous language play an important part in the film’s rich evocation of the underlying ambiguities of thought and sexuality at its core.
A Dangerous Method opens with a virtuoso sequence involving Keira Knightley’s contorting body. Its rawness forms a stark contrast to the composed characters introduced thereafter. Knightley has been criticized for the unhinged nature of her physical performance, but she handles the role with assuredness and merges a range of sexual foibles rather convincingly. Knightly provides the source of the film’s manic energy, while Michael Fassbender, as Carl Jung, gradually sheds his mannered veneer and slips deeper into imprudence in order to satisfy his sexual desires. Finally, Viggo Mortensen balances the film’s hyper-sexuality by imbuing his portrayal of Sigmund Freud with a cool intellectualism and serene arrogance. His ongoing dialogue with Fassbender’s Jung (both in person and more compellingly through letters) makes for some of the movie’s most tantalizing moments as the animosity between the two grows deeper.
While A Dangerous Method parts ways with Cronenberg’s usual preoccupation with violence, the ease with which it fashions a vividly sensual aesthetic in such an understated manner remains consistent with the director’s past work and shines in fresh ways here. But don’t buy the hype that A Dangerous Method is somehow incongruent with Cronenberg’s style because it is not concerned with violence. The director’s usual savagery is very much intact (especially considering that each of the trio of characters inflicts harm upon the others that is equally devastating as any physical pain), along with his keen fixation on bodies. The difference with this film is that it more explicitly hones in on and explodes the Cartesian notion of the separation of mind and body that has afflicted psychoanalysis and invaded broader cultural notions of the two. Instead of highlighting the contrast between humanity’s base sensibilities—intellect and sex—A Dangerous Method removes the seams between them and dares to suggest that, in actuality, each intensifies the other. (David Cronenberg, 2011) ****
Posted by Ted Pigeon