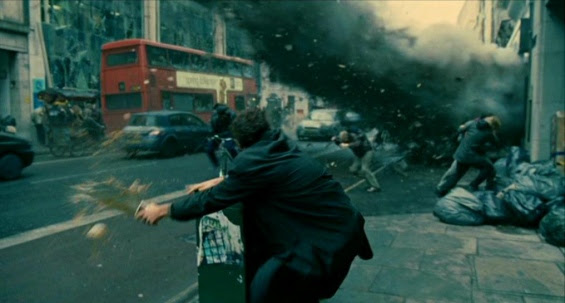 I recently came across this interview from last month with Alfonso Cuaron about Children of Men:

"What I hate is when cinema is hostage of narrative...

Let cinema breathe, in which narrative is an element of the cinematic experience, but it's [just] an element, as acting is an element, cinematography is an element. Music and decors, those are elements. But right now? Cinema becomes just about seeing illustrated stories as opposed to engaging audiences in an experience in which you don't explain much....

The principle of cinema is that you are looking at that screen. A lot of reviewers nowadays, they fall into that vice: they want stories. They want explanations, they want exposition and they want political postures. Why does cinema have to be a medium for making political statements as opposed to presenting facts, presenting elements and then you making your own conclusions -- even if they are elusive? There's nothing more beautiful than elusiveness in cinema."

Cuaron voices a rare and essential perspective about cinema as a visual medium. Too often, critics and filmmakers fail to engage these properties of cinema and, in so doing, miss out on the treasures that it can offer. I wish more members of the film and film criticism community understood that which they study with the same knowledge that Cuaron possesses.

Too many film goers, makers, and critics are focused on plot, exposition, and structure. While it may be true that some films are good precisely because how they incorporate plot elements, they are just elements in a larger picture. Great cinema is about the interaction of all of these elements, and there is no set way of achieving that. The components of each film interact differently depending on how each aspect is constructed and positioned. But cinematic greatness is achieved when every frame breathes with life as a result of such an interaction. Cuaron understands this, and his last three films are testimony to that understanding. Children of Men, Harry Potter and the Prisoner of Azkaban, and Y Tu Mama Tambien all feature meticulously crafted images capable of revealing subtleties in various aspects of the storytelling, which for each film is quite different.

Children of Men fascinates me because it confounds the lines between real and symbolic. Cuaron frames his near-future Britain with an approach featuring many long-take and hand-held shots, which creates a sense of authenticity. He creates a dismal-looking future defined by violence, atrocities, and fear, in which society has crumbled from within because women are infertile. Cuaron never bothers to provide reasons for the infertility, and he doesn't need to. That isn't what the film is about.

In the opening moments of the film, the images are just as focused on the world in which the characters inhabit as on the characters themselves. Furthermore, the film plunges you into its world without much exposition or explanation, which, as Cuaron explains, are almost irrelevant. He is interested in exploring how human beings exist in social spheres, and how they interact institutionally under extreme circumstances. And his observances of violence, death, and imprisonment are startling because the world he has created is oddly familiar, not only in terms of how it was constructed, but what is constructed. The comparisons are at times blunt. Cuaron wants to evoke feelings and thoughts that constitute how we currently relate to and interact with our visual culture and the outside world.

However, by not revealing particular details about the plot with exposition and scienctific explanation, Cuaron contrasts the very real feeling of the film with an allegorical subtext brimming with ambiguity. The focus of Clive Owen's central character, Theo, is ensuring that a miraculously pregnant woman and her baby reach The Human Project, a symbol of hope in the deteriorating world around them. The structure of the film itself performs a highwire act, balancing familiar chase story conventions and motifs while summarily rejecting them by integrating them into the social world that the characters inhabit. The "chase" motifs that inspire Cuaron's action sequences are not so much plot devices as revealing moments of the story and character.

Therefore, the film seems to exist unto itself, as if Cuaron is merely observing this world. The viewer is positioned not to question what occurs within the structure of the plot; a plot which reveals itself to be a symbolic journey simulataneously representing hope and dread. In a conventional sense, the film is about Theo's character arc, but the storytelling stretches far beyond its topical concerns. Theo's story resonates more effectively because of the manner in which Cuaron makes the plot relevant to the style of the storytelling, not the sole means by which the story achieves its weight. The interaction between the characters' mission (the plot) and the world of which they are apart (the social setting) meld seamlessly, yielding moments of pure mastery in the film's climax, in which all of the film's visual styles interact so effectively with the social environment they have created. Amongst the anarchy of gunfire and explosions that eventually unleashes, the sight and sound of a crying baby juxtaposed with images of war and destruction is profound moment of both hope and defeat.

Children of Men conveys conveys its themes in a way respectful to viewer, intwining many ideas and feelings into what could have been a somewhat conventional chase story. Instead, Cuaron's perspective of this world and the need to tell its story in relation to the characters' journey results in a visceral, emotional, and cerebral cinematic experience. Somehow, Cuaron melds these moods and feelings together into a piece of cinema that is beautifully... elusive.

[Note: I originally posted this review on 1/20/07, prior to the current format for my Cinema 2006 series. I've removed that post and posted it here among my other selections. For those who have seen this post before, my apologies. For those that haven't, and I'm sure there are many, this disclaimer doesn't hold any meaning. My mislead quest for perfectionism continues...]
Posted by Ted Pigeon

"A lot of reviewers nowadays, they fall into that vice: they want stories. They want explanations, they want exposition and they want political postures. Why does cinema have to be a medium for making political statements as opposed to presenting facts, presenting elements and then you making your own conclusions -- even if they are elusive? There's nothing more beautiful than elusiveness in cinema."

I think you just missed a blogathon that will perhaps resurface next year that had some good discussions on the audience's need for narrative (it was kind of a recurring theme) which is an ancient observation -- but given the limited history of film, the reprisal is as understandable, i've concluded, as the reaction to it as something staid and undesirable, a phase.

I have yet to see Children of Men, but I will keep your comments in mind when I do. Most of the feedback has been disappointment. I figure a lot of that had to do with this being Cuaron's first real American film. He was able to turn around that horrible direction that Chris Columbus had imbued the Harry Potters with and make it more than just palatable. I also think people expected both great things from a new sci-fi (a highly underdeveloped genre) and from Cuaron, the celluloid conquistador.

Does this seem accurate to you, or am I missing something else?

You should definitely try to see the film, Johanna. I found your comments very interesting. As for your mention of the spectator's need for narrative, I plan to write about this and other related topics at great length in the near future.

Concerning Alfonso Cuaron, he seems to be on a mission to overhaul how images are constructed and consumed. He recognizes how numb - as filmmakers and critics - we've become to stylistic devices of the film and narrative media, and with this film, he is actively challenging the spectator to think about the film medium itself, while at the same time immersing him or her within the narrative, but in an entirely new way. This pattern was evident in Y Tu Mama Tambien, as well as in the Harry Potter film he directed.

I think you're onto something regarding Cuaron's stylistic choices...I felt like he was trying to penetrate a very solid naivete in our society, where coming of age is concerned...but whether the former was a function of the latter or vice versa, I can't say.

I'll be keeping my eyes out for interviews, though.