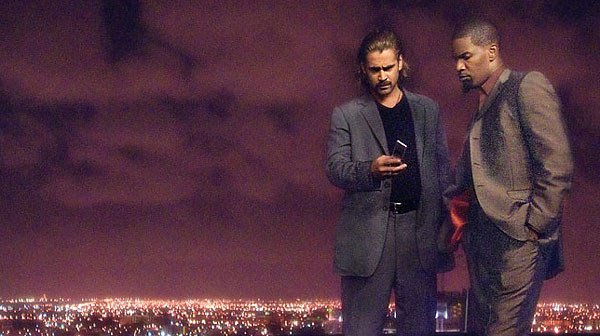 In defending her reasoning for naming Miami Vice as one of the year's best films, New York Times film critic Manohla Dargis cites the film's exploration of cinematic space. I agree with Dargis completely, and would argue that Michael Mann uses the digital medium to breathe life into the fairly simple cops-and-drugs story. Mann constructs beautiful images and sounds to create cinematic space dripping with moods and atmosphere which seeps into every area of the storytelling. In doing so, he explores the depths of his characters more fully with an atmosphere that is both seductive and brimming with danger. The structure and dialogue of this film are nothing extraordinary, at least viewed in relation to similar films of the genre. But Mann proves that how ever well-treaded or generic a plot may be, there are always different ways both stylistic and structural of executing it visually.

For instance, there is a very straightforward exchange between two characters on a speedboat midway through the picture that is charged with an eroticism only brought to life through the interaction of the elements within the moving images. Actions that would be processed without much conscious thought in a different film are here fascinating, whether it's in how the wind blows their hair or causes their clothes to ripple. The whole film is made up of these moments, and seeing them within a familiar narrative structure makes it even more interesting and original, as opposed to if it wasn't steeped in genre tradition. But Mann's juxtaposition of the new and the familiar results in a visual and auditory experience of pure intoxication that is both real and dream-like.

Valuing style over substance (forgive the cliche, but it's useful in this context), the film blends familiar narrative norms with new images, allowing the viewer to see and feel the story in a completely new way, despite being grounded in very conventional traditions. Mann not only redefines cinematic space with this film, but he also redefines the presentation sexuality, violence, gender, identification, and representation within a familiar narrative framework, thus reimagining the possibility of visual storytelling.
Posted by Ted Pigeon