Gems of a genre: Sunshine and Paprika 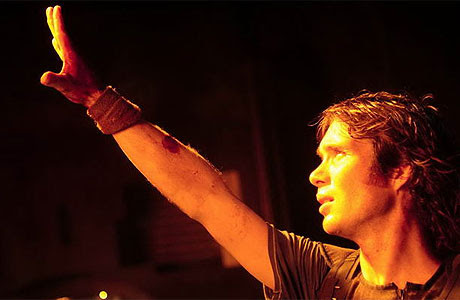 Much has been made about the supposed revitalization of the western in 2007, with revisionist films like The Assinationation of Jesses James and 3:10 to Yuma garnering a fair amount of critical attention. But the notion that the genre is can be revived is somewhat belittling. It reflects a very particular attitude that certain cinematic styles or genres can "die" when they fall out of current popular trends. This perspective isn't too embracing of innovation of qualitative or quantitative varieties. According to this ideology, cinema is a field of neat, quantifiable categories into which movies may be placed. The viewer/critic watched a movie with the knowledge of these pre-existing categories and the criteria for meeting those categories and then interprets movies accordingly in order to place them neatly into the boxes labeled "Western," "Film Noir," "Classical Hollywood," etc. This is an unfortunate and restricting way to see this a means of artistic expression, if only because cinema is always growing, along with our knowledge of it. The aforementioned categories are very real and necessary, but to perceive films through the lense of this strict perspective is to miss what movies are really about: moving images, sounds, and narrative, specifically the unique interplay between them. Cinema was not meant to be labeled with symptoms or terms, but should instead be seen (and examined) head-on. In other words, the how is more important than the why.

While last year was certainly an integral time for westerns, particularly for revisioning the genre itself for the digital age (not just the age of digital cinema), there have also been a number of other films that expand and/or subvert the genres and cinematic styles from which they took inspiration, despite not embodying the predetermined standard of a particular genre. Much of the "genre talk" in recent months has been about the Western, but other forms and styles have seen additions/expansions as well, such as animation (Persepolis, Ratatouille), film noir (Brick, although this is as 2006 feature), documentary (Helvetica, Manufactured Landscapes), horror (The Orphanage), etc.

The science fiction genre is an ever-elusive one in cinematic terms, because it takes cues from and morphs with so many other narrative and cinematic styles. Like other establishes narrative and stylistic molds, science fiction also grew last year due to several wonderful entries, some of which may not classify as classic science fiction, but in their subversions and differences contribute quite a bit to the development of it. Two films really stand out as great additions to the genre, neither of which has been mentioned much in the whirlwinds of masturbatory dialoguing (lists and awards) about the same films now being ushered into critical canon. But these two films are among the more interesting, even transcendent movies of last year: Paprika and Sunshine.

Satoshi Kon's Paprika is a film of many things, but above all, it is about dreams. It shatters all distinctions between actual and virtual, analog and digital, in its exploration of cyberlife, avatars, and digital space via the realm of the unconscious, of elusive lucidity. Kon masterfully constructs two distinct worlds: one involving cops, scientists, and cityscapes, i.e. reality, and the other about circusses, carnivals, and the gateways between genres. In each respective world, he constructs a story that so effortlessly blends conventional narrative motifs of chases, mysteries, technologies gone haywire, and various other distantly recognizable elements, and somehow he streamlines it in a way that makes sense in the way that a dream makes sense: not linearly, but abstractly. And as the plot develops and the conflict intensifies, the two worlds collide, which results in a frenetic but sublime cinematic experience.

Paprika is the kind of movie that's thoroughly conventional in its narrative cues and dramatic beats, even in its thematic trappings of the subservsion of the actual/virtual binary. But the manner in which it weaves these threads around one another, through each other, and together is incredibly inventive, and its marriage of movement and sounds is like being in a dream through the swirling colors and motions of its animation. It's an intoxicating experience that will linger in the conscious and unconscious mind. On several levels it could be seen as an allegory for cinema; not just cinematic technology (as the plot deals with scientific advances which enables individuals to explore dreams), but about the state of movement and time that cinema can construct, a way of seeing and hearing that manifests in all of us.

Danny Boyle's Sunshine, despite being a different kind of film experience and concerned with different ideas, can be thought of as a kind of companion piece to Paprika because it is a pure visual and auditory experience. It's been called a "great half of a film" by many critics and sci-fi lovers, mainly because after a quietly compelling and cerebral first act, the films veers into more visceral territory. It's perfectly understandable why some would be jarred by the film seemingly changing gears, but the film's change of direction should not be credited to laziness, but rather an attempt at transcendence, one that it nearly achieves.

The driving narrative force behind the film is that the sun is dying, which is why a group of scientists are sent to detonate some kind of advanced bomb on the sun's surface that would re-ignite it. It's a far-fetched notion, but one that's dealth with convincing sincerity by Boyle and his writers. The first half of movie builds a strong sense of the crew and atmosphere, and is refresing on the grounds that it embodies that distant notion of sci-fi being both intelligent and entertaining. It definitely owes a lot to greats like Alien and 2001, but the film seems to be after something different than those movies. It captures a strong sense of an existential void in its quiet tones and long-enduring images of the sun's surface. The characters aren't developed throughout the narrative in the classical sense, but they are very real in terms of how they interact with each other. Besides, good drama is not about building character but revealing it. As the films moves towards its conclusion and the stakes are increasingly raised, it achieves a sublimity in its sights and sounds that few films would dare to attempt. Somehow, it melds its the cold, disslocation of humanity's insignificance with a deeply humanistic spirit that is all the more moving because of the existential backdrop of the film's moods, themes, and images.

As an experience, Sunshine is so many things at once. Like Paprika it assembles various elements of familiar narrative techniques and science fiction staples in a way that serves to honor the genre. But it also forms incongruities by contrasting different ideas and images, and it seeks to disrupt common manifestations of the "man vs. technology" and "the triumph of man" themes. But in doing so, it reveals more nuances to already-established narrative flows and concepts and even broaches new ones, as it reaches a purely visceral climax that can really, truly be called a trumph of the human spirit. It makes the sight of that burning star utterly sublime, whether one is close enough to touch it or millions of miles away on this rock called Earth. It's visual poetry.

Films like Sunshine and Paprika are reminders that branding something with a genre "label" at all is utter nonsense. These movies are more than just great science fiction movies. At the same time, they are also each great works of science fiction, and they should wear that badge with honor. Because science fiction, like any genre, is not a label or a list of symptomological criteria. Not something tangible or concrete, genre is instead a shifting, growing plane of visual and auditory experience, with some of its elements recurring out of necessity of familiarity, and others emerging totally fresh from envisioning those familiar components in new ways. Genres are born out of our individual and cultural experiences and manifest in our memories and images, where they are embedded forever. 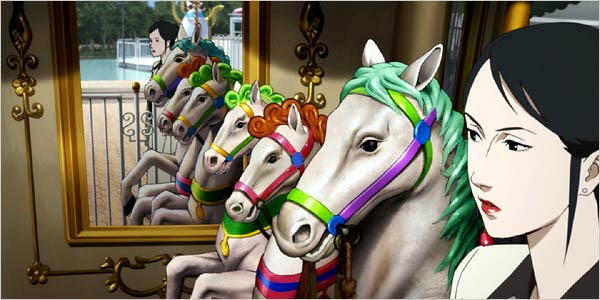 "Sunshine" hit my favs of the year at number 7. You've been reading the wrong people, Ted! Kidding. I've actually seen "Sunshine" pop up in quite a few year end lists, mostly from blogs littered around here and there, but there are admirers out there. I love how it shifts genres so courageously, as well as being one helluva great sci-fi film.

I've always had real problems labeling the return of a genre as "revisionist," simply because it displaces certain myths or re-negotiates the iconography. This is particularly true with the Western. Unforgiven and 3:10 to Yuma have been dubbed modern "revisionist" westerns because of their attention to details absent in "classical" westerns: more realism, more respect to various groups of people.

But I don't consider these films to be meta-commentaries on the genre itself. They represent new visions of the West from our current historical point of view, but revisionist seems like the wrong term.

Excellent blog! Keep up the great writing and inventive posts.

Thanks for the comments, guys.

Joseph: I have seen "Sunshine" featured on a fair amount of blogs and other review sites, which is re-assuring, but I was thinking more of journalistic critics when I wrote this. In terms of the critical establishment, the film was largely forgotten. Thankfully, online writers have recognized it, which I find encouraging as blog writing becomes a greater factor in film criticism.

Benjamin: I suppose it depends on how one envisions the effect of "revisionist" genre pieces on the genres themselves. Some would say that they are separate from the genre (which would go back to that "genre as box" perspective). I think films that are outwardly or subtly reflexive on a given cinematic style is an effort within a genre to expand its capacity.

Terms like "revisionist" are definitely reductive, which is why I prefer "reflexive." No matter the term, though, when we are at a point at which we recognize a schism between what a genre was and what it is now, it's almost impossible for a film of that genre not to be reflexive or revisionist in some ways, whether it honors that genre's classical traditions or subverts them.

What I liked about 3:10 to Yuma was that is was both revisionist and classical at the same time. Mangold created a universe firmly entrenched in genre tradition also feels contemporary in its aesthetic; which is particularly difficult for a genre like the western. It captures the timelessness of the genre, but also its flexibility toward particular cultural and social spaces.

Sunshine was one of my absolute favourite films of the last year. I more or less agree with your ideas about it - it's astonishing as a purely sensual experience and in terms of the existential questions it raises to a quasi-transcendental level. I think it's easily Boyle's best film and I'm disappointed (though hardly surprised) that it hasn't received more mainstream critical attention.

I would agree that Sunshine is probably Boyle's best film. It amazes me that it hasn't gotten much mainstream critical attention at all. It's amazing how "logic" in cinema still drives a great deal of film criticism. I don't get it, but a lot of critics crave tidyness and consistency in films.

Sunshine made me feel like I actually touched the Sun and burned.

And that is probably the highest point of any art.