Brian DePalma's underlying concept for his lraq war film, Redacted is noteworthy, along with his conviction and outrage regarding the subject matter. But those qualities are often hindered by sloppy execution, at least when it comes to formal film appreciation. Where DePalma is concerned mostly with stylistic details, his empassioned presentation of a soldier's experience in (and perspective of) Iraq is marred by poor acting and connect-the-dots screenwriting. Yet Redacted still manages to fulfill its purpose -- i.e. to disturb and provoke -- despite its failure to engage on the cerebral levels its makers clearly want to. The feelings/reactions that DePalma attempts to evoke are complicated, no doubt, but his film may work best as a piece of sensationalist propaganda, a la "Cops" or its news equivalent, "The O'Reilly Factor." Only instead of the dangerous streets of urban America, this film turns the tables on dominant representations of Iraqis and looks at the atrocities committed by American soldiers in Iraq; not safe territory. But the film isn't so much about heinous acts of bigotry and racism as it is about the dangers of representation in media economy, and how theses representations foster unhealthy and overly simplistic perspectives of people and cultures.

Redacted both critiques and embodies the kind of trash journalism that is pervasive in today's media environment, one that feeds on spectators' fears and nationalistic desires. Despite the formal failings in fundamental areas of filmmaking --acting and writing-- DePalma seems content to explore the nature of perspective in an age of ever-multiplying information sources and commercial interests. Redacted is a literally a visual assault of information, and although it sacrifices sound, formal filmmaking and occupies a particular political position, it is an important film because it is assaultive. It's an active reflection on the crisis of representation that has mounted for some time and is now boiling over in digital culture.

The film follows a squad of American soldiers stationed in Iraq, who, when they're not playing cards and bonding in male comradery (as only the movies can deliver), patrolthe dilapidated streets of an Iraqi city. Children run and play like any kids in a schoolyard might; kicking soccer balls and playing tag. Men and women walk about the rubble of destroyed buildings, going about their days in a more seemingly haphazard manner than would be Manhattan business people, patiently waiting in masses for a "Walk" sign to instruct them. City dwellers regard the soldiers with trepidation, despite having grown accustomed to their presence. Interestingly, the film keeps a strong focus on the soldiers themselves, concerning how hot, uncomfortable, and disoriented they are rather than anyone else. The soldiers loathe being there, and justifiably so. But the film keys in on the soldiers with regards to their view of everything around them, implicitly or explicitly wondering why or how a culture could be so different, violent, and barbaric. Every civilian is a potential suspect in the eyes of the soldiers, and after surprise assaults and bombings, they have gotten used to that. 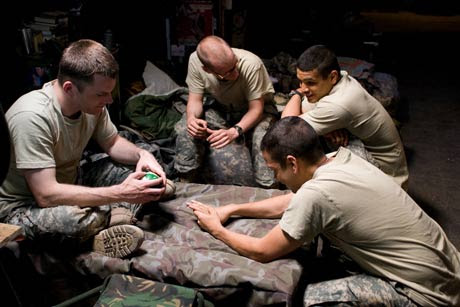 The movie is especially interesting in these moments, which are mostly captured on a small hand-held camera operated by on of the soliders who is resigned to capture the realism and immediacy of what they're enduring. This narrative and stylistic tactic is brilliantly used to form a soldier's sense of the surroundings and provide a feeling of the underlying tensions between two very different cultures and ideologies in such close prximity, each physically and symbolically occupying the same space. And yet on that ground, there tragically exists no plane of understanding, of sympathy, and of acceptance. Whether each culture's -- i.e. persons on the street (soldiers or citizens) -- perspective of the other is accurate or inaccurate, those perspectives are sealed in the cultural and ideological assumptions underlined in their respective practices. It's a cynical interpretation of everyday encounters between American soliders and Iraqi citizens, but one that's hard to deny.

Redacted doesn't remain grounded in these observations in the first portion of the film, arguably its most provocative. DePalma instead shifts attention to the rape of an innocent girl by two U.S. soldiers, an event depicted in graphic detail via the hand-held camera's night vision. The idealistic soldier operating the camera in no way condones the actions of the two soldiers who raped and killed the girl and her family, but his choice to record it becomes the central thematic groundwork on which the film bases its ehical, social, and philosophical claims. To play witness to an event is to submit to some kind mediating structure which enables one to interpret that image or event in a particular way. In other words, the spectator plays just an integral a role in the construction of a representation as those who construct it to be seen.

Apart from these consideration, the images are difficult to watch. There is a reality to it, one that is all the more sickening knowing that something similar to this actually happened. But if there was no desire to see the event, then it would not have been captured, and only would have existed in the memories of those who experienced it. Nevertheless, the man watches through the lens of the camera before leaving the building in sickness and disgust. The remainder of the film presents a variety if disparate images, some involving soldier's tributes to fallen heroes, others taking on security-cam vision of the soldiers interrogated over the events of rape. And perhaps most interestingly, several scenes offer up internet images of YouTube-like sites, where videos are posted by soldier's wives, anti-war activists, and masked soldiers admitting to having seen the event of the rape.

These moments are provocative in the greater consideration of media economy that the film actively constructs. Where the drama of the characters and soldiers' encounters tends to fizzle out in several scenes of poor acting and literalist writing, these different mediated images imbue the film's final proceedings with a level of interest that was only subtly suggested in first two acts. Whether DePalma knows it, the film eventually becomes the schlock pastiche of violent images and mediated information it seeks to question. The final montage of real images of carnage, death, and destruction suffered by the people of Iraq illustrates the polarizing differences between two cultures that ideologically and now physically clash. The problem is that those physical clashings are captured and portrayed in very particular manners, so as perhaps to facilitate further ideological clashings between what Slavoj Zizek deems the war between the "civilized" West and the "barbaric" culture of Islam it seeks to cleanse. Therefore, when we see these alternative, painful representations of those physical clashings, the need for a stronger and altogether different way of engaging issues of war/violence, media economy, and international relations becomes quite evident in the visceral, emotional reaction of witnessing such tragic occurrences.

In spite of its failings, Redacted strikes a resounding chord in an age in which cable news shows assault viewers with a plurality of violent images designed to evoke a specific emotional response: Fear; of terror, extremism, both which are too often foolishly associated with Islam. DePalma's central premise --that fear is harnessed by media powers as the central tool in the production of misguided nationalism-- is potent and relevant, and is one that mainstream (and so-called "liberal") media wouldn't dare consider.

The real question is to what extent his assertions against mainstream representations of violence and destruction may actually reproduce the very same kind of fears, thus failing to offer the beginnings of an alternative method of thinking the situation. And so we arrive once again to the crisis of representation: by refusing to offer dominant, i.e. patriotic representations of American soldiers and instead constructing a wholly different portrait of Iraq -- one that is readily accessible to those who decide to educate themselves about the American occupation in Iraq -- is DePalma degrading all troops and America? That's tough to say, but I would venture to guess based on the methods of his film's inquiry that he is more likely examining the notion that this "conflict" is more intricate than our narrow interpretations and representations will allow.
Posted by Ted Pigeon