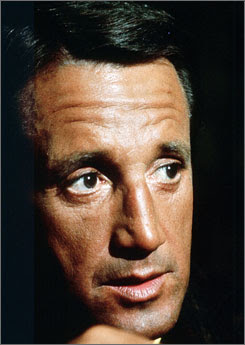 Roy Scheider is the acting equivalent of Sidney Lumet. His filmography is staggering, and not because he was in so many hits or because of the awards he won. Over his long career, Scheider has quietly assembled one of the most impressive careers an actor can have in Hollywood. And quite simply, it's because he was good. He committed to each role he played, which is evident in his variety of strong performances, from The French Connection to All The Jazz. His face expressed so much but with so little. There was a passion in his eyes that was at once confident and vulnerable. Revealing character in the most subtle, even mysterious ways, the beauty of Scheider's work is that he did it in his own way. He carved his own niche. His best performances will be remembered as some of the most important and significant in all of cinema.

His most famous utterance on screen is the immortal "We're gonna need a bigger boat" line from Jaws. The cigarette dangles from his mouth like he doesn't even know it's there, his body is frozen in shock, and in that one moment of immobility he communicates exactly what every viewer watching the film feels. It's one of the most memorable moments in all of the movies, and it comes across because of Scheider's ability to evoke the intangibility about acting. This moment alone will cement Scheider into the minds of millions. It will be forever branded on the silver screens of our minds.

But for me, his finest moment comes in the very same movie, but in a much more tender scene at a dinner table. The scene contains almost no dialogue, and consists of Chief Brody (Scheider) and his son, who is maybe four-years-old, sitting at the table after dinner. Brody is tired and stressed, more so than he would ever expected to have dealth with. He's also beginning to feel a bit like the lone figure of authority left on Amity island with a shred of ethical responsiblity. His son sits across from him, watching him and mimicking his actions. At first, Brody doesn't realize he is even there, let alone replicating his actions. When he finally glances over and sees his son gazing admirably at him, he doesn't smile or well up in tears but instead looks right back at him. His facial muscles begin to relax, but for a moment he looks searchingly back into his son's eyes, as if he is recalling his own childhood wonderment with his father while realizing what a figure of importance he is to his child.

Brody then decides to have a little bit of fun, almost to reassure him that everything is going to be alright. The playful candor between the two is so naive, so benevolent, and yet profoundly simple, that it locates a childish wonderment that lives buried underneath the stress and burdens of everyday life. In that moment Scheider and his young acting counterpart create real magic. The scene continues with Brody leading his son in a series of strange hand motions and facial contortions, before his son finally smiles at him like he knew that was the one thing Brody needed to get through the rest of his day. Brody then leans down close to the boy's face and softly says, "Give us a kiss." The boy asks why, and Brody responds simply, directly, even painfully, as if caught between the reality of being chief of police in shark city and the transient moment of connecting with his son: "Because I need it."

Beautiful tribute. Thanks for that.

Well said. Today, we go slow ahead for Chief Brody.

Just remember: an island is an island only if you look at it from the water.

Well done, Ted. You've captured something about the essnece of Scheider's work that is very appealing and I think your likening him to Sidney Lumet is very apt. I also agree with you completely about the dinner table scene being his finest moment in the film. So tender, so moving, so beautiful.

When I found out about Scheider's death I felt the desire not only to watch Jaws again but to revisit All That Jazz, a film which now will have even more significance than it ever has.

Wonderful post, so well written. That moment - "because I need it" - speaks not just to the depth of Brody's character and the his status as protector - of both the town and his family - but also to the exquisite nuances that Scheider brought to the role. It's among my favorite moments on film.

Give us a kiss. I'd forgotten that line. Nice.

wow its very nice!! thank you!

Yes. I was looking for others who felt this scene the way I do. (Did you also dig the barn raising in Witness?)