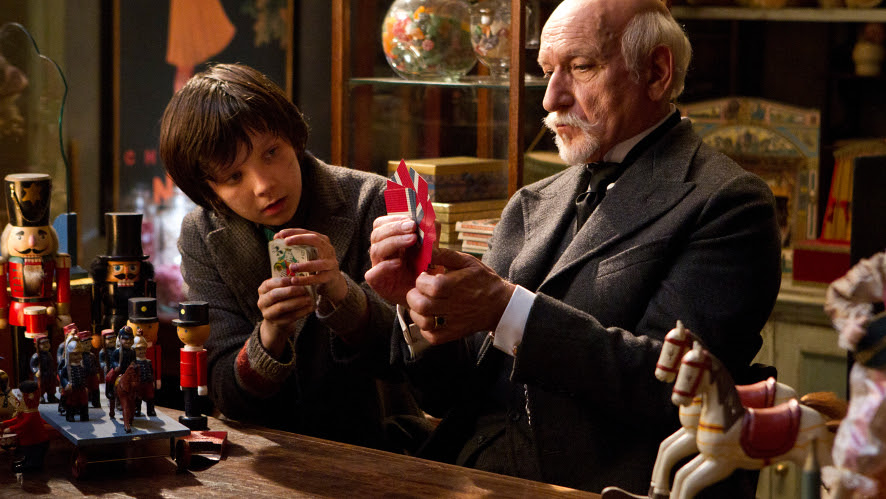 It’s refreshing to see Martin Scorsese try his hand at more whimsical material. The famed auteur is renowned for orchestrating sprawling crime sagas and dark fantasies centered on troubled individuals, but Hugo represents a shift in tone and outlook from these and even his more uncharacteristic works. It is dense in narrative but airy in mood. Its fairy tale leanings are clear in the opening shot, which flies through the snowy streets of Paris and into a great clock within a train station. It then maneuvers through smoke and gears without any sense of gravity, following the young title character as he navigates the clock’s endless innards. This is the first of many sequences showing off the endless possibilities of the medium. Aided by Howard Shore's lavish score, Scorsese employs a flood of traditional and contemporary special effects in an effort to fashion an ethereal atmosphere to the train station where many of the main set pieces take place. In fact, the film works best when it is wandering about this world, spinning enchantments with small, but charming character vignettes.

Where Hugo somewhat loses its footing—perversely enough—is with its gradual gaining of narrative direction. Somehow, it fuses Hugo Cabret’s tragic backstory with that of an old man’s who he meets in the station. The crotchety fellow, played by Ben Kingsley, turns out to be George Méliès, a pioneer of cinema who directed such classics as A Trip to the Moon and then later fell into depression when the world lost interest in his movies. How the screenplay converges these disparate back-stories is a bit of a muddle. Nevertheless, the boy eventually brings about the redemption of Méliès in what ultimately amounts to be a love letter to the movies. Once the message about film preservation is revealed in the later passages, so too, it seems, is Scorsese’s inspiration for making the film. Having said that, Scorsese does more to validate the magic of the movies elsewhere throughout the film than with his late focus on Méliès. The old filmmaker’s story isn't a glaring problem, however I found it emotionally distant as compared to the earlier focus on the boy and the other station dwellers. This is one of the many anomalies that make Hugo so difficult to characterize.
Perhaps because I became wrapped up in its web of optimism and filmmaking bravado, I was less bothered by Hugo's inherent problems. I knew when I was watching it there was something distinct about its strange mix of sensibilities and thematic core that would keep me returning to it. Although the explicit message about film preservation doesn’t quite work in context, its underlying ideas and attitudes about art are beautifully realized and reflected in the movement of the storytelling. Thereupon, Hugo is a poignant ode to the great works of art that influence minds old and young alike, those that are with us for generations and those that slip through their maker’s fingers. (Martin Scorsese, 2011) ***½
Posted by Ted Pigeon

My wife and I recently watched it and loved it. It was interesting to see Scorsese dealing with material more typically suited to his buddy Spielberg... and doing a good job with it. We both laughed out loud though when the blatantly shameless appeal for film preservation (something I am an advocate of but which I agree felt a little out of place here) surfaced.

The film is definitely an odd play for Scorsese. But I love when a filmmaker who is already established in a particular arena branches out to something new. With Hugo, Scorsese's aesthetic remains careful and nuanced, but because it's such different material for him the result is a decidedly different kind of film. It's kind of a throwback family film but with a serious approach and filmmaking bravado, to boot. There are definitely some slippery aspects about it—perhaps due to this being Scorsese's first foray into this kind of storytelling—but the film is always interesting and inventive even when it's not always working. That why, I think, I was more receptive to its problems.