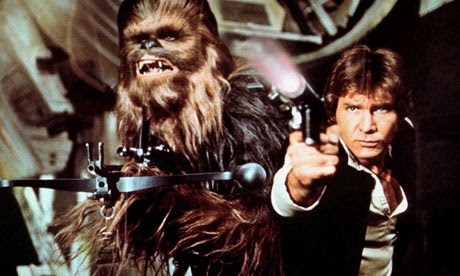 After the chaotic orgy of noise and color committed by the prequel episodes, the original Star Wars beams ever stronger with clarity and purpose. It is a self-contained marvel that suggests a larger universe more than showing it. Whether this is symptomatic of the technological limitations of the time or the studio pressures George Lucas faced is hard to say. Nevertheless, Star Wars exhibits a real love of the composition. The famous opening shot is a prime example, with a pan down to a planet before two ships roar into the frame from above. Cutting to the reverse angle to show the ships racing toward us then provides a sense of scale to the proceedings both physically and narratively. These two shots are all we need. This visual elegance is expressed throughout the film, as when R2-D2 finds himself inside the bowels of a giant vessel maneuvering across the sand dunes: the camera moves slowly across the metallic junk and gradually gains focus of R2 amid the clutter. It may not have a “wow” factor but it has atmosphere and patience. These kinds of shots may explain in part why the environments of the film resonate in our minds. Lucas patiently establishes each locale and lets the world envelop you, depicting vast detail while always moving the plot along. This film has such a strong sense of place that even certain settings—such as the interior of the Millennium Falcon, the seedy cantina, and space itself—become characters.

In a variety of critical accounts of Star Wars, much has been made of how expertly George Lucas fused together a host of mythological and epic archetypes and set them in motion in galaxies far away. It’s all true. But of equal significance to the story is the storytelling, which ultimately accounts for why this film has endeared itself to audiences and burrowed into our conscious and unconscious minds for more than three decades. No doubt, its images of spaceships dashing through the mechanistic canyon of the Death Star’s surface represent some of the most visionary moments in film history. But we should also take notice of the understated simplicity with which this film moves and unfolds, even in the quiet moments.
Although the greatest achievement of the six-film series belongs to The Empire Strikes Back, the original film is the purest and the leanest. More than any other entry in the saga, Star Wars stands independent of the commercial empire it later signified and operates fully on its own, an emblem of economical storytelling and a sprawling spectacle that would become one of cinema’s greatest treasures. (George Lucas, 1977/1997/2004) ****

* To remain consistent with the approach I’ve established (to watch these films as Lucas intended from Episode I through Episode VI), I am obliged to officially cite this film by its revised title. Although the original 1977 cut would be my preference as a film lover and fan of the original trilogy, in the interest of this project at hand I am watching the more current 2004 DVD editions.**

** Believe it or not, I don’t have much of a problem with the tricked out special editions. Lucasfilm did eventually release the theatrical cuts of the original trilogy (barring one small change to the title card of Star Wars). Although I wish he and his team had done so with more care, Lucas is off the hook as far as I’m concerned. I actually enjoy the fact that there are many versions of these films; at the very least, it’s an intriguing filmmaking experiment.
Posted by Ted Pigeon